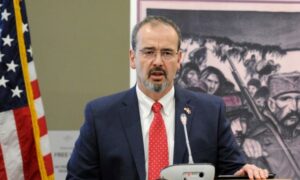 When the great American novelist Mark Twain was on a speaking tour in in London in 1897, someone started a rumor that he was gravely ill. Twain later learned of press reports that he had died, prompting a characteristic reply: “Reports of my death have been greatly exaggerated.”

This response from the writer of Tom Sawyer and Huckleberry Finn, among other great works, resonated with me as I have read comments from a series of Serbian analysts and politicians, including the ministers, that the Covid-19 crisis has shifted geopolitical influence from Western Europe and the United States to Beijing or Moscow.  Friends, let me announce that reports of the end of Serbia’s cooperation with the West have been greatly exaggerated.

For more than half a century, the United States has been the largest contributor to global health security, providing more than $140 billion in the past 20 years alone.  Much of the $1 billion we have provided in assistance here since 2001 has likewise focused on developing Serbia’s health system.  Today, even as we face a grim situation back home,  the American people are sending assistance to Serbia in the form of testing kits, PPE, and other urgently needed items.  I am delighted to witness Serbia’s generosity and mature regional leadership as it utilizes its strengthened health and business sectors to extend a helping hand to its neighbors during the crisis.  The United States is eternally grateful for Serbia helping American citizens return home recently.

As I have repeatedly stated over the past month, all international assistance to fight this pandemic is welcome, and we must come together now to solve the problem.  Working together is the only way we are going to beat this virus and hope to resume some level of prosperity and normalcy in our lives.

That being said, what is most clear to me these days is the importance of transparency and accurate information.  Sunday is World Press Freedom Day, so this offers an ideal opportunity for us to reflect on the values of journalism and the free flow of information. The United States was founded as an experiment in democracy against the tyranny of an unchecked monarch.  That is why our Constitution enshrines the right to a free press.  We believe that corruption and tyranny thrive when free speech and free press are suppressed.

The Covid crisis provides further evidence of this.  Free and open information about the spread of the virus during the initial outbreak in China was lacking and greatly compounded the tragedy the world faces today.  Chinese authorities silenced medical professionals who tried to sound the alarm bells.  Some, including Dr. Li Wenliang, who tried to blow the whistle in Wuhan early on, were silenced.  Tragically, he himself died of the coronavirus.

Greater transparency, informing the public, and requesting international assistance when the first cases appeared could have saved countless lives and allowed a rapid global response at least a month or two earlier.

It’s true that authoritarian regimes might be better prepared than open societies to control and restrict movement during a pandemic.  But I would argue that if China had had a democracy and a free press, if doctors like Dr. Li were allowed to speak out, that would have helped China and the world nip this health problem in the bud.

Democracy, independent media, and a government that practices transparency are strong preventive measures against problems like COVID-19 in the first place.  Government officials should have a feeling of responsibility toward their citizens and be held accountable for their actions or inaction resulting in harm to their constituents.

Countries of the world, including Serbia, are coming together to help each other.  That was beautifully demonstrated last weekend with Belgrade’s delivery of much-needed aid to Italy.  We have so much work to do not just to beat the virus, but to rebuild our lives and our economies.  The recovery is going to be difficult, but I am convinced we can do it and we will emerge stronger and smarter.

This crisis is not going to kill the ideals of an open, free, and democratic society, values that Serbia and its neighbors in Europe hold dear.  Now, more than ever, we must follow the light shed by liberty, transparency, and openness to ensure we do not repeat the mistakes that have allowed Covid to thrive.