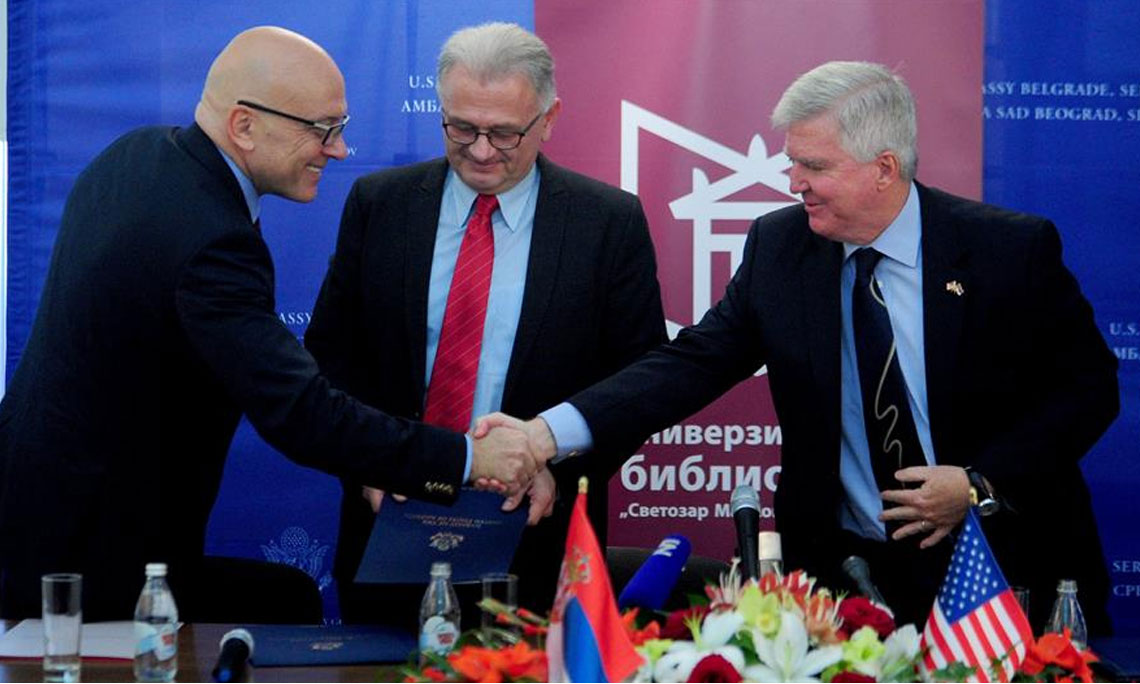 The Carnegie Endowment donated $100,000 to the Serbian Government in 1920 for the construction of the Svetozar Markovic University Library in Belgrade. Almost 100 years later, in 2016 under the auspices of the Ambassadors Fund for Cultural Preservation (AFCP), Embassy awarded a $106,000 grant to the University Library Svetozar Markovic, intended for the reconstruction of the historic building which celebrated its 90th anniversary. The AFCP has provided more than $460,000 that help Serbia preserve its cultural heritage.

The Svetozar Markovic University Library Director  prof. dr. Aleksandar Jerkov and the ambassador of the United States to Belgrade Kyle Scott signed the AFCP grant worth $106,000.  The funds will be used for the complete reconstruction of the roof and the facade, which will be carried out in 2017.

Kyle Scott, the ambassador of the USA to Belgrade, said that the AFCP donation demonstrates the lasting friendship between the USA and Serbia, as well as the USA’s dedication to helping Serbia preserve historic material and important chapters of its history.

This grant is a part of a broader initiative under the auspices of the AFCP. By taking a leading role in efforts to preserve cultural heritage, the U.S. shows its respect for cultural heritage of other nations. Previous AFCP-supported projects in Serbia include the Roman Imperial Palace Sirmium in Sremska Mitrovica, Roman archeological site Felix Romuliana in Zajecar, the Ethnographic Museum in Belgrade, Roman Catholic Church of Saint Ana in Bela Crkva, Serbian Orthodox Monastery Studenica, Roman archeological site Viminacium and Muslim community of Southern Serbia.