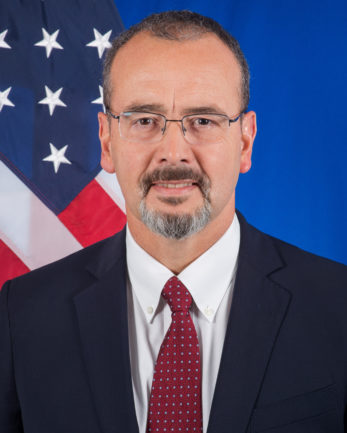 As U.S. Ambassador, Anthony F. Godfrey leads the U.S. Government’s efforts to advance its partnership with Serbia, expand economic prosperity, and assist Serbia’s efforts for European integration.  It is in the strategic interest of the United States that Serbia develops as a modern, democratic, and prosperous European nation that is at peace with its neighbors and demonstrates full respect for the rule of law and rights of its citizens.  Helping our Serbian partners to strengthen their democratic institutions, protect the rights of members of minority communities, combat corruption, and improve media freedom are key areas for Ambassador Godfrey and his team.  Supporting Serbia’s goal of EU membership and regional stability by promoting the normalization of relations between Pristina and Belgrade is a top priority for Ambassador Godfrey.

Ambassador Godfrey, a career member of the Senior Foreign Service, class of Minister Counselor, arrived in Serbia on October 23.  He served from 2015 to 2019 as Political Minister Counselor, and then Deputy Chief of Mission, at U.S. Embassy Moscow, Russia.  He was Director of Iraq Affairs in the Bureau of Near Eastern Affairs at the Department of State 2013-2015, and Political Minister Counselor at the U.S. Embassy in Baghdad 2012-2013.  During almost 40 years of service in the U.S. Navy and the Foreign Service, Ambassador Godfrey has become expert in central and southern European affairs.

Ambassador Godfrey was Director for Turkey and Eurasian Energy at the National Security Council, 2011-2012, and Political-Military Affairs Counselor at the U.S. Embassy in Ankara, Turkey, 2008-2011.  He was Deputy Chief of Mission at U.S. Embassy Yerevan, Armenia, 2004-2007, and Political Officer at U.S. Embassy Zagreb, Croatia, 2001-2004.  He was International Affairs Officer in the Office of Russian Affairs, Bureau of European and Eurasian affairs, 1998-2000, and Deputy Head of Group, OSCE Assistance Group, in Chechnya, Grozny, Russia, 1996-1997.  His U.S. Navy service, 1980-1992, included tours in Turkey and Japan, and he studied Russian at the Defense Language Institute in Monterey, California.  His final military assignment was four years with the On-Site Inspection Agency, working to verify Soviet implementation of arms control agreements.

Ambassador Godfrey earned a B.A. with Highest Honors at the University of California at Davis.  His numerous awards include the 2018 James A. Baker III DCM of the Year Award.  He speaks Russian, Serbo-Croatian and Turkish.

Mr. Godfrey is married to the former Anne O’Toole, whom he met while posted in Dublin.  They have three children, ages 27, 19, and 18.