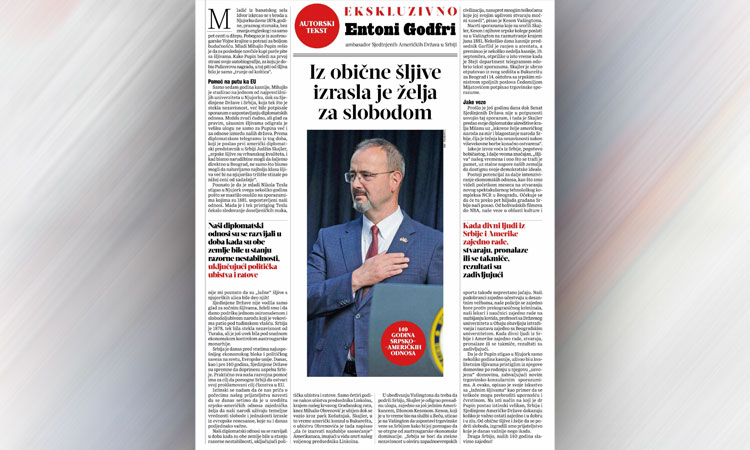 By Ambassador Anthony F. Godfrey published in “Kurir” daily news paper on the occasion of the 140 years of Serbian-American Relations.

When a young man from the Banat village of Idvor stepped off the boat in New York City in 1874, his stomach was empty, he did not speak English, and had only five cents in his pocket.  He was fleeing the military frontier of the Austrian Empire in search of a better future.  The young Mihajlo Pupin decided to spend his remaining money on a piece of plum pie.  As Pupin recounted on the first page of his Pulitzer Prize-winning autobiography, the plum pie contained “nothing but pits of prunes.” [translator’s note: pit = the stone/seed of the plum/ prune is a dried plum]

Just seven years later, Mihajlo was studying at one of the most prestigious universities in New York, while the United States and a newly independent Serbia had signed a treaty establishing diplomatic relations.  Perhaps surprisingly, a hunger for tasty and true plums played a large role not just for Pupin but for relations between our two countries as well.  According to a diplomatic telegram from that era sent by America’s first diplomatic representative to Serbia, Eugene Schuyler, “The plums in Serbia are of excellent quality and if orders could be sent directly to Belgrade, not only could a better class of prunes be obtained, but they could be put upon the market in New York more cheaply than at present.”

We know that young Nikola Tesla landed in New York just a few years after the ink dried on the treaties that established our relations in 1881.  Although Tesla faced his share of struggles as a new immigrant, I am not aware of “bogus” New York street plums being one of them!

The United States did not just have a hunger for quality plums, we also wanted to support an impoverished and freedom-loving people that had suffered under centuries of foreign domination.  Serbia had gained independence from Turkey only in 1878, yet was still under the heavy economic control of the Austro-Hungarian Empire.

Today, Serbia stands at the door of the world’s most successful trading bloc and political alliance, the European Union.  Now, just as 140 years ago, the United States is ready to help Serbia succeed.  Practically all of our development assistance is intended to help Serbia achieve its stated goal of joining the EU.

I truly hope that the story of the first days of our friendship will inspire us today to remember that the beating heart of the Serbian-American relationship is our shared desire for our peoples to enjoy the key values of liberty and equality born out of the European Renaissance, which are just as important today.

Our diplomatic relations were developed in an era when both of our nations were plagued with extreme instability, including political assassinations and wars.  Just four years after President Lincoln was murdered, near the end of our bloody Civil War, Prince Obrenovic was shot and killed while traveling through Kosutnjak park.  Schuyler, who was then the U.S. Consul in Bucharest, wrote that the assassination of Obrenovic “will excite the most profound sympathy” from Americans, given the death of our beloved President Lincoln.

Schuyler, along with another American, John Kasson, played a vital role in convincing Washington of the need to support Serbia.  Kasson, who was based in Vienna at the time, urged Washington to establish a trade relationship to help Serbia escape Austro-Hungarian commercial domination.  “Serbia is struggling to establish its independence with the civilization of western Europe, under many difficulties arriving from powerful intervening neighbors,” Kasson wrote to Washington.

The treaties drafted by Schuyler, Kasson, and their Serbian counterparts were sent to Washington for review in late June, 1881.  Days later, President Garfield was wounded by an assassin.  He died weeks later, on September 19, about the same time as the Department of State sent a telegram approving the text of the treaties.  Schuyler quickly traveled from his post in Bucharest for Belgrade, signing the consular and commercial treaties on October 14 with Serbia’s Minister of Foreign Affairs, Cedomilj Mijatovic.

It would be one more year before the U.S. Senate fully approved the treaty, at which point Schuyler presented his diplomatic credentials to King Milan alongside “the sincere wishes of the American people for the peace and welfare of the Serbian nation, whose longing for independence, after centuries of struggle, have at last been realized.”

Although Serbia’s fruit and berry exports continue to be hugely important, the plums of 2021 are brainpower, and our struggle is our nations’ constant efforts to live up to our democratic ideals.

We saw earlier this month the potential for even stronger commercial relations with the opening of NCR’s amazing new campus in Belgrade, where more than 5,000 Serbian citizens are expected to be employed.  From Hollywood films to the NBA, our cultural and sports ties also continue to expand.  Our paratroopers jump from airplanes together, our police fight cross-border crime, our doctors and scientists are working together to stop COVID, professors from Ohio State are researching and teaching with Belgrade University.  When Serbians and Americans work, create, invent, and play together, amazing things happen.

Dr. Pupin arrived in New York several years too early to benefit from quality plums arriving from his birth nation to his adopted home, thanks to the new commercial and consular treaties.  Still, he wrote about his “bogus plum” incident as an example of overcoming hardships through persistence and stamina.  In the same way Dr. Pupin achieved true greatness, Serbia and the United States are proving the importance of sticking together through bad and good.  From a humble plum, we have built a friendship that matters now more than ever.  Dear Serbia, Congratulations on 140 years!