Home Насловна страна | News & Events | From the Outside Looking in 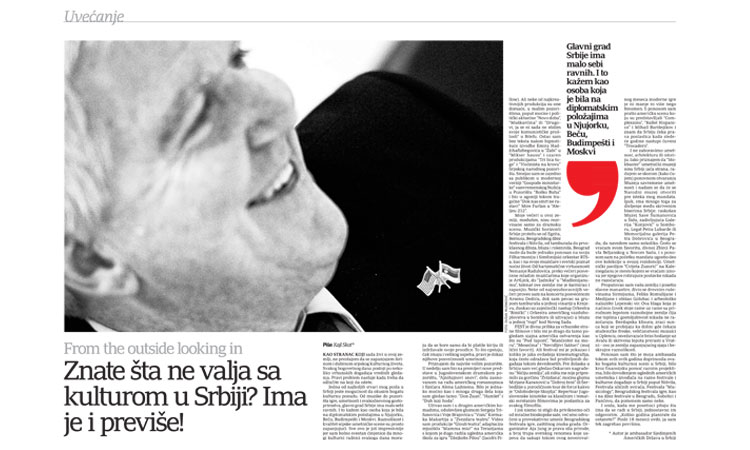 Author of this text is the Ambassador of the United States Kyle Scott. The article was published in daily news paper “Blic” cultural insert.

Do you know what’s wrong with culture in Serbia?  There’s too much of it!

As an outsider now living in this country, I am constantly amazed by the breadth and depth of Serbian cultural life.  On any given day, there are a handful of top-flight events worth seeing.  The real trouble is deciding which ones to choose.

One of the great parts of my position in Serbia is the opportunity to taste its rich cultural offerings.  From music to theater, dance, art, and everyday hospitality, Serbia’s capital knows few equals.  And I say this as a person who has served diplomatic tours in New York, Vienna, Budapest, and Moscow.  Day in and day out, the variety and the quality of Serbia’s arts scene is simply overwhelming.  This is all the more impressive because I am painfully aware that many cultural figures must struggle every day just to pay the rent and provide for their families.  That they persevere and even thrive is a credit to their commitment to their art.

I admit to a preference for the theater.  On Sunday I saw the premier of a new production at the Jugoslovensko Dramsko Pozoriste of “Einstein’s Dreams,” a work based on the work of American novelist and physicist, Alan Lightman.  It was just as strong as the many other works I have seen there – Don Juan, Hamlet, and Duh koji hoda.  I’ve also enjoyed other American plays, thrilled by Sergej Trifunovic and Voja Brajovic’s performances in Cormack McCarthy’s “Voz” at Zvezdara.  I’ve seen performances by the Globe Theater, and adaptations of Western musicals like “Mamma Mia” at Terazia, with whom the renowned American dance school at Jacobs Pillow has long worked.  But some of the most creative productions were home-grown at smaller theaters, such as the powerful and politically relevant Nova Doba, Muskarcina or “Comrades, I’m Not Ashamed of my Communist Past” at BITEF.  I was left speechless by Emir Hadžihafizbegović’s mesmerizing performance of Zaba at Mixer House, and uplifted by the Serbian National Theater’s productions of “Fiddler on the Roof” and “Three Faces of Sadness.”  I laughed along with the audience to Bosko Buha’s innovative version of Nusic’s timeless “Madame Minister,” and agonized at Mira Furlan’s tragic “Until Death Do Us Part” at Atelje 212.

But it’s not just the busy and active drama scene that occupies my evenings in this country.  Serbia’s music horizons range from classical music to the EXIT, BEMUS, Belgrade Jazz and Nisvil Festivals, from tambourashi to first-class jazz, blues, and rock and roll.  Belgrade can be just as proud of its philharmonic orchestra (and the RTS Orchestra too!) as it can of its musicians and its world-renowned night life.  From Nemanja Radulovic’s charismatic virtuosity to an evening of young musicians organized by ArtLink to “Les Miserables” at Madelenianum, I’ve been charmed and stunned by this country’s talent.  Some of the most memorable evenings include a night of song in memory of Arsen Dedic, singing along with a tambouritsa group at a winery in Krnjevo, dancing to the combined U.S. Air Force/Binički Orchestra in Sombor, or enjoying blues in a dive outside of Novi Sad.

Belgrade’s Film Festival is a wonderful venue for top-notch foreign films, and I was glad to see great American hits like “Spotlight,” “Manchester by the Sea,” “Moonlight,” and “Hidden Figures” (my personal favorite) on display.  But the festival also opened my eyes to the strength of cinematography from this region, often reflecting the pain of the shared experiences of the 1990’s.  I had seen the Academy Award winning “No Man’s Land” before my arrival, but nothing prepared me for the poignancy of “Zvizdan,” the powerhouse performance of Mirjana Karanovic in “A Good Wife,” or a Serbedzija family tour de force in “Liberation of Skoplje.”  The Kinoteka’s repertoire of classic and theme-based films is a treat for any movie buff.

No sooner do we emerge from the darkened cinema than we are swept into the edgy artistry of Belgrade’s signature Dance Festival.  Aja Jung, its organizer, is a force of nature, and the number of world-renowned troupes she manages to bring together for this incredible month of modern dance is nothing short of phenomenal.  I’ve been proud to see American dance represented by Complexions, Ballet Hispanico, and Mikhail Baryshnykov, and I know Serbia is in for a treat when the iconic Trocadero is scheduled to perform next year.

And let’s not forget art, architecture or history.   Although I accept that blockbuster art museums are not currently Belgrade’s strongest point, I look forward to the re-opening (soon, I hear) of the Contemporary Art Museum, and hope the National Art Museum will finally re-open before my mandate expires.  Still, there is much to admire in some of Serbia’s hidden jewels –the sumptuous Sumanovic museum in Sid, the stunning Konjovic Gallery in Sombor, and the Lubarda Legat or Dobrovic Memorial Gallery in Belgrade, to name just a few.  I have returned frequently to my personal favorite, the amazing Beljanski collection in Novi Sad, and was proud to have hosted a part of that collection in my residence at the beginning of my mandate.  The Cvijeta Zuzoric Art Pavilion in Kalamegdon is a place I’ve returned to over and over again, as its rotating exhibits never disappoint.   Travelling this country, I’ve visited your glorious monasteries, admired the ancient ruins of Sirmium, Felix Romuliana, and Mediana, and visited the stunning renovations of Golubac castle and the archeological digs at Lepenski Vir.  These man-made treasures are matched by the natural beauty of this land of color whose warmth and hospitality never disappoint.  The Danube Gorge, sun piercing the valley where Studenica Monastery’s frescoes await, the magnificent mosaics in Oplenac, an invigorating hike up Avala, or the hidden beauty of the towering stone arches in Vratna – this is a land of breathtaking  splendor and unending diversity.

I am proud that my Embassy has been contributing to such a rich cultural scene in Serbia all these years by providing either financial support for the projects or by bringing prominent U.S. artists and performers to participate in the various festivals and cultural events in Serbia such as the Nisville Music Festival, the Street Musicians Festival, the Musicology Festival, the Belgrade Dance Festival as well as jazz festivals in Belgrade, Subotica, and Pančevo, to name a few.

So when visitors ask me what there is to do in Serbia, I simply reply: how many years do you plan to stay?  After eighteen months here, I have barely scratched the surface.