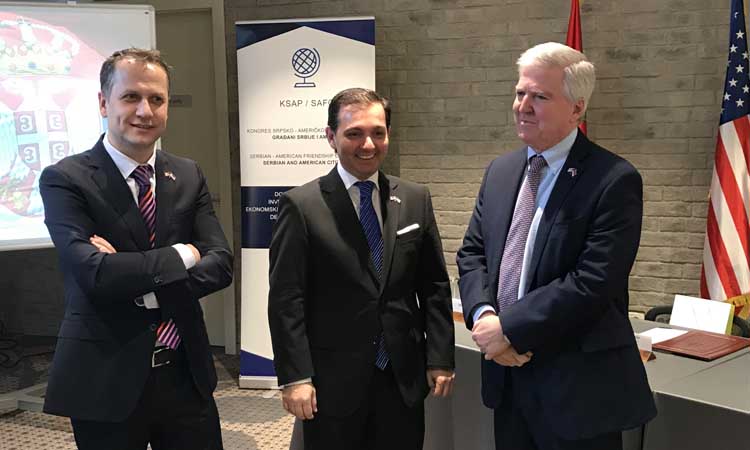 First, I would like to thank Deputy Speaker Marinkovic for inviting me here today and for his initiative to found the Serbian-American Friendship Congress, and am honored also that Deputy Prime Minister Mihajlovic has also agreed to join us here today.

The United States sees Serbia as a dear friend of long standing.  I welcome any effort to celebrate and enlarge that friendship.  This is a distinguished group and I am grateful to all of you for your participation.  I hope that Serbians from all over the country, from all walks of life, and from all different political perspectives will feel welcome to participate in this initiative.  I am confident that the founding of this Congress – an entirely Serbian initiative which I was glad to embrace– will help tell the story of this friendship and enable our two peoples and cultures to deepen our ties into the future.

After two years in Serbia, I have come to know this country’s warmth and hospitality.  I have become caught up in the passion with which issues are debated, and the commitment and pride that Serbs feel for their homeland.  And yes, I have been exasperated at times to read headlines in the tabloids that attribute the very worst of intentions to my country, to see news media that quote so-called experts and un-named sources to spread the worst lies imaginable.  But the only antidote to hate speech is free speech – brave men and women such as you who are ready to stand up for the truth.

The truth is that the ties that bind our two nations are part of our shared DNA.  It literally flows in the veins of our peoples.  Serbians have enriched American culture in virtually every field of human endeavor.  Scientists, inventors, engineers, academics, soldiers, artists of all kinds, athletes — the list of renowned Serbians in American history is long and impressive.  Serbia’s Orthodox faith lives strong in communities like Libertyville, Milwaukee and New York, but also is places you wouldn’t necessarily expect it.  You can find proud Serbian Americans attending St. Sava churches in my home town, Phoenix, AZ, but also in Issaqah, WA, Cypress, TX, and Parma, OH.  My first Serbian teacher, Oce Milosevic, presided over the Serbian Orthodox community in Potomac, MD, and young Serbian-Americans still carry on the traditions of their ancestors from Biddleford, ME all the way to Honolulu, HI.

Our ties don’t just flow in our blood.  Our two peoples have also spilled Serbian and American blood in common struggles.  During the First World War, 10,000 Serbian-Americans joined the Serbian Army as volunteers and fought at Thessaloniki (Salonika).  American doctors and nurses volunteered to come and treat those who were wounded and sick, manning the last remaining hospital in Belgrade as our common enemies rained artillery on this city and disease devastated an entire generation.  President Woodrow Wilson, encouraged by the great Serbian-American Mikhail Pupin, was so inspired by the unbreakable spirit of the Serbian people that he ordered the Serbian flag to be flown over the White House, and included a call for international guarantees of Serbia’s political and economic independence in his famous Fourteen Points speech.

That friendship and alliance endured through the Second World War, when brave Serbian men and women risked their lives and the lives of their families to shelter U.S. airmen shot down by enemy forces in our shared struggle against Nazism.  After that war, despite ideological disagreements, President Truman asked the U.S. Congress to provide the economic and military aid Yugoslavia so desperately needed at that time.

For a brief moment in time, however, our two nations parted ways.  The policies of Slobodan Milosevic during the bloody and violent dissolution of Yugoslavia placed the historical bonds of our two peoples to the ultimate test.  The bitter memory of that period still hangs like a pall over our relations.  We must recognize this, and accept up.  But we must also move on – or more correctly move back to where we always were.

Because the truth is that relations between the United States and Serbia today are as wide and deep as they ever have been in the 135 years since the United States first recognized the Kingdom of Serbia as a sovereign, independent nation.  An entire generation has come to adulthood since American and Serbs stood on opposite sides during that conflict.  And in the generation that has passed, our nations’ ties have grown ever stronger.  U.S. businesses employ more than 17,000 Serbian workers.  Over the past 15 years, the United States has provided nearly $1 billion in assistance to Serbia for programs to develop strong economic institutions, fair labor laws, a more effective judiciary, and to fight corruption and waste.  American and Serbian troops train together to tackle global peacekeeping challenges, and our security services stand together against terrorism and other forms of violent extremism.    Today, more than 20,000 Serbians visit the United States every year, and nearly 1,000 Serbian students attend U.S. universities.  These people-to-people ties are weaving a rich tapestry that binds our peoples more closely every day, and I look forward to the Serbian-American Friendship Congress’ efforts to further strengthen those ties.

It has been a century since the Serbian flag flew over the White House.  As we reflect on that moment of unity, it strikes me that this image is a perfect symbol of the aspiration of the founders of the Serbian American Friendship Congress.

So 2018 is an especially auspicious time to inaugurate a new friendship initiative as we celebrate the 100th anniversary of that speech.  Yes, there have been trials, and we have not always agreed, but the U.S.-Serbian partnership is a true friendship.  We should all be proud of what we have already accomplished together, and I look forward to celebrating and developing it with all of you.  This new Serbian-American Friendship Congress is another exciting chapter in the tale of our friendly relations, and I look forward to seeing what it can do to deepen that friendship.