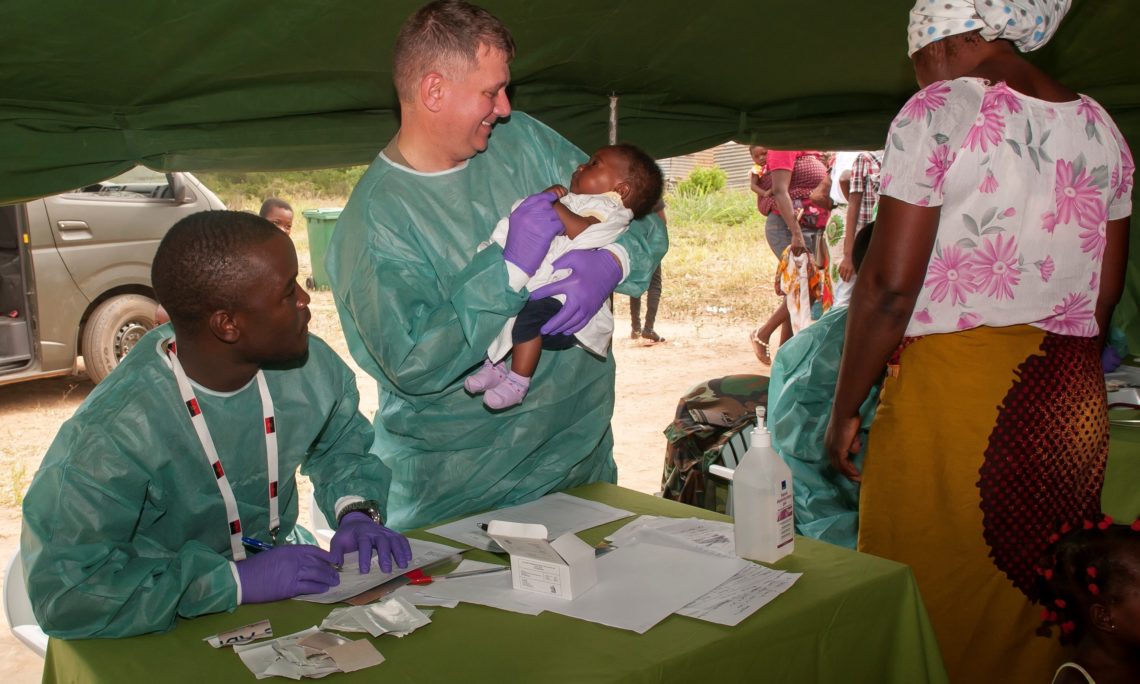 Maj. Donald McHone (second from left), an Ohio Army National Guard nurse mentoring during the PAMBALA medical exercise, holds a baby in the triage clinic in the village of Vale do Paraiso Dec. 11, 2017, in Bengo Province. PAMBALA is the first-ever trilateral combined medical engagement to take place

Airmen and Soldiers of the Ohio National Guard and Serbian Armed Forces arrived here Dec. 8 for PAMBALA 2017, a two-phase trilateral medical engagement, and the welcome, not to mention the weather, couldn’t be warmer.

The Angolan Armed Forces kicked off phase two of PAMBALA by providing participating military personnel tours of the locations that the three militaries will jointly operate over the next several days. In addition, members of the Angolan Armed Forces hosted a cultural day on Dec. 10, which featured a trip to the Monumento a Batalha de Kifangondo and a cookout for the Angolan, Serbian and American troops with locals from the surrounding village attending.

During phase two, military medical personnel from Angola, Serbia and Ohio will operate a field hospital Dec. 11-15 in the Bengo Province of Angola. They will focus on areas such as preventative medicine, pediatrics, family practice, dermatology, optometry, dentistry, and obstetrics and gynecology. This engagement is the first-of-its-kind to happen in the Republic of Angola and is part of a trilateral agreement between Angola, Serbia and the United States.

“I think the most important part of this combined engagement is working together to interchange our knowledge and our experiences to see the ways other people are doing things,”

“It’s very useful for us to learn the different ways other people solve problems. Every approach is good for improvement.”

The first phase of PAMBALA 2017 took place Dec. 4-9, and consisted of educational training on disease containment and management, tropical diseases and prevention of hemorrhagic fever. Members from the Ohio National Guard focused on teaching classes on disaster response and disease containment and then became the students, learning from the Angolan Armed Forces, who taught classes on topics such as tropical diseases.

“These are diseases we learned about in medical school, but never had any practical application of because they’re not diseases we see in the USA,” said Maj. Adam Bihl, a pediatric physician for the exercise. “However, they are diseases we could see when we’re deployed to different environments and taking care of our service members.”

By participating in this engagement, Ohio National Guard personnel will obtain real-world experience and training in Angola on diseases they might never see in the United States, while also providing valuable coaching and mentorship on disease management and containment.

“For Angola, this exercise will increase the national capacity to respond to hemorrhagic sickness,”

said Col. Marlene Fonseca of the Angolan Armed Forces, who is serving as chief of staff for the PAMBALA exercise.

“If there is an outbreak in Angola, it will be of international concern also because it is a very contagious disease.”

The chance to learn from one another on topics that can affect the world while also observing different approaches and training on medical procedures is an opportunity many Soldiers and Airmen of the Ohio National Guard have never had before.

“I know my medical professionals are looking forward to learning a lot about the tropical diseases that are in this particular part of the world, a place we’re not used to working in on a normal basis,”

“We’re looking forward to learning about all of the things the Angolan Armed Forces can teach us. We’re very excited to be here.”

PAMBALA 2017 is a two-phase exercise that will provide mutually beneficial training and experience to Angola, Serbia and the Ohio National Guard. The Ohio National Guard was invited to participate in this historic engagement, allowing medical personnel the opportunity to share best practices, strengthen medical treatment processes and establish new relationships with members of the Angolan Armed Forces while enhancing the ONG’s existing 11-year partnership with Serbia.