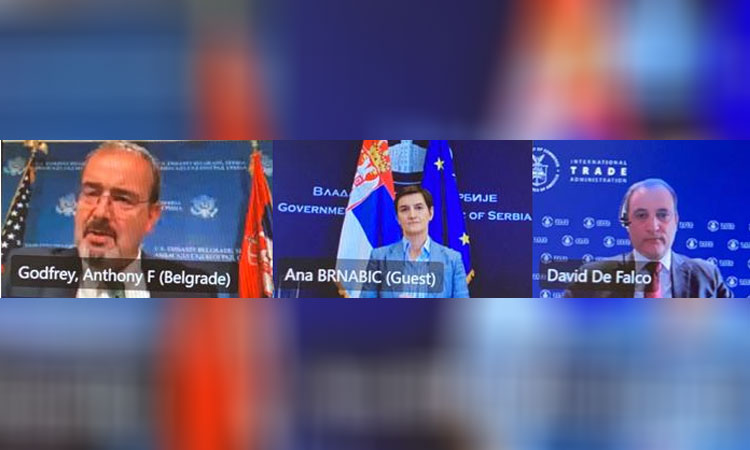 U.S. Department of Commerce Deputy Assistant Secretary (DAS) for Europe and Eurasia David De Falco is leading a “virtual visit” to Serbia from May 25-27, 2021, to celebrate 140 years of diplomatic relations and promote trade and investment between the United States and Serbia.

During his visit, DAS De Falco held bilateral meetings with Prime Minister Ana Brnabic, as well as ministerial heads and senior officials from the Ministry of Mining and Energy, Ministry of Trade, Tourism and Telecommunications, Ministry of Health, Ministry of Economy, and Ministry of Construction, Transportation and Infrastructure. He also engaged directly with the private sector and met with Chamber of Commerce and Industry in Serbia (CCIS) President Marko Čadež, among others.

DAS De Falco also indicated that the U.S. Department of Commerce is on track to more than double its official engagements with Serbia this year and is working to implement a joint commercial programing series in partnership with CCIS President Marko Čadež and Serbian Ambassador Marko Djuric to further celebrate the 140th year anniversary.

Additionally, the American Chamber of Commerce Serbia hosted DAS De Falco for a lively and interactive roundtable discussion with AmCham members and U.S company representatives in the renewable energy, medical device, and IT sectors. DAS De Falco discussed the Department’s upcoming activities in Serbia and heard feedback on the business climate and ways to increase collaboration.