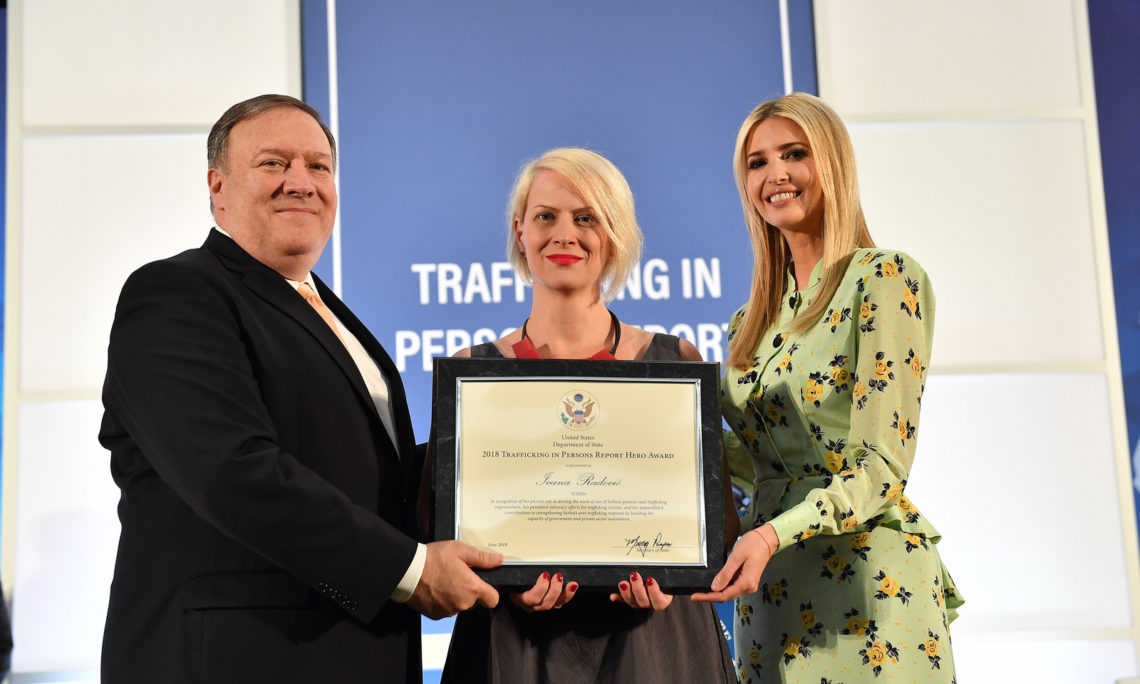 Secretary of State Mike Pompeo, joined by Advisor to the President Ivanka Trump, presents a certificate to 2018 'TIP Report Hero' Ivana Radović of Serbia. Ivana Radović is one of ten individuals from around the world who was recognized for her efforts to fight against human trafficking, at the U.S.

The United States Secretary of State named Ivana Radović a Trafficking in Persons (TIP) Hero.  Ms. Radović is Head of Policy and Learning at ASTRA, one of Serbia’s premier grassroots anti-trafficking NGOs.  The Department of State also upgraded Serbia to Tier Two on its annual TIP Report, a reflection of the work that the Serbian Government did in 2017 to combat and suppress human trafficking.

Ms. Radović is the first TIP Hero from Serbia.  Secretary Pompeo selected her because of her exemplary work to strengthen Serbia’s response to human trafficking through advocacy and engagement with the government; the development of reports and resources for practitioners; and the provision of legal representation for victims, including free legal review of workers’ employment contracts to ensure compliance with labor laws.  The U.S. Embassy in Belgrade hopes that her excellent example will inspire future generations to work on preventing these kinds of crimes and working for justice for the victims.

Serbia’s anti-trafficking efforts throughout 2017 are reflected in its move up in the rankings to Tier Two, and the United States wholeheartedly endorses Serbia’s goal to reach the Tier One ranking by 2022.  Freeing victims, preventing trafficking, and bringing traffickers to justice are the ultimate goals of the annual TIP Report and the U.S Government’s anti-trafficking policy.

The U.S. Embassy in Belgrade looks forward to working with Serbia to accomplish its goals and stands ready to assist and support the Serbian Government and NGOs working to stop modern slavery. The Department of State and the United States Embassy in Belgrade extend our sincere congratulations to Ms. Radović and thank her for her work on behalf of trafficking victims.