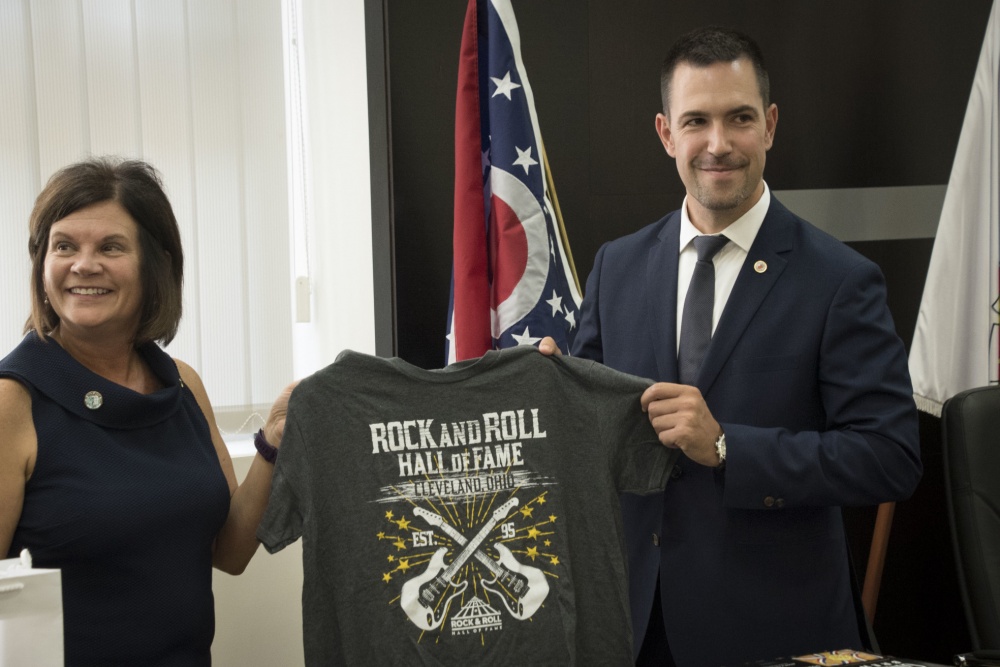 Over the last 12 years bonds between the Ohio National Guard and the Republic of Serbia have grown strong, a product of the Department of Defense’s State Partnership Program, which pairs states’ National Guards with nations around the world in mutually beneficial relationships.

Serbian law enforcement and military personnel train together with Ohio National Guard members together during annual exercises on a variety of key military skills, including medical, riot control and peacekeeping tactics and techniques. In 2018, more than 25 events have been or will be conducted, focusing on disaster preparedness, chaplaincy, cyber-security, senior leader engagements and peacekeeping, including an upcoming capstone event in early September.

Now, representatives of Kraljevo, Serbia are seeking military-to-civilian and civilian-to-civilian interaction through additional multinational agreements, initiated from the foundation built through the partnership between the Ohio National Guard and Serbian Armed Forces.
Leaders from Serbia have introduced a mode of culture, information and other sharing in the form of a Sister Cities agreement.

The purpose of the Sister Cities agreement is to promote acceptance and respect of diversity and social, economic and cultural understanding that will benefit both communities.
Kraljevo Mayor Predrag Terzić reached out to members of the Ohio National Guard and Ohio government to identify a suitable city to partner with.

“The City of Kraljevo has already established sister city cooperation and partner relations with a number of European and world cities and municipalities. A desire to extend this form of relations… is founded on the cooperation with the Ohio National Guard,” reads the formal request from Kraljevo to Djerdj Matkovic, the Serbian ambassador to the United States.
With a strong expatriate community of Serbians, South Euclid, Ohio, located in northeast Ohio, is the perfect motivator for a partnership between the two communities. In addition, South Euclid Mayor Georgine Welo’s family is from the Jagodnja region in western Serbia.

“More so now than ever it is important for a community to have a vibrant engaged network, both locally and internationally,” Welo said. “The Sister Cities International Program will allow the City of South Euclid, Ohio the opportunity to build and explore opportunities like cultural, youth and municipal exchanges.”

The relationships connecting Kraljevo and the Ohio National Guard date back to 2012, when engineering units from the Ohio Army and Air National Guard helped renovate a local school damaged by an earthquake.

“(It) left lasting impressions on our troops, and meaningful connections were made between our Soldiers and Airmen and the Serbian troops, many of whom are still friends, five years later,” said Maj. Roger Nienberg, the commander of the 179th Airlift Wing’s Civil Engineering Squadron. “I am sure the same can be said for the Serbian troops and students and teachers of Kraljevo.”

The partnership agreement between Kraljevo and South Euclid is scheduled to be signed this fall.

As the partnership between the Ohio National Guard and the Serbian Armed Forces continues to grow, the results are showing beyond the battlefield. It shows in the friendships between communities and the citizens of both Ohio and Serbia, through which both hope to nurture economic, social and cultural relationships.