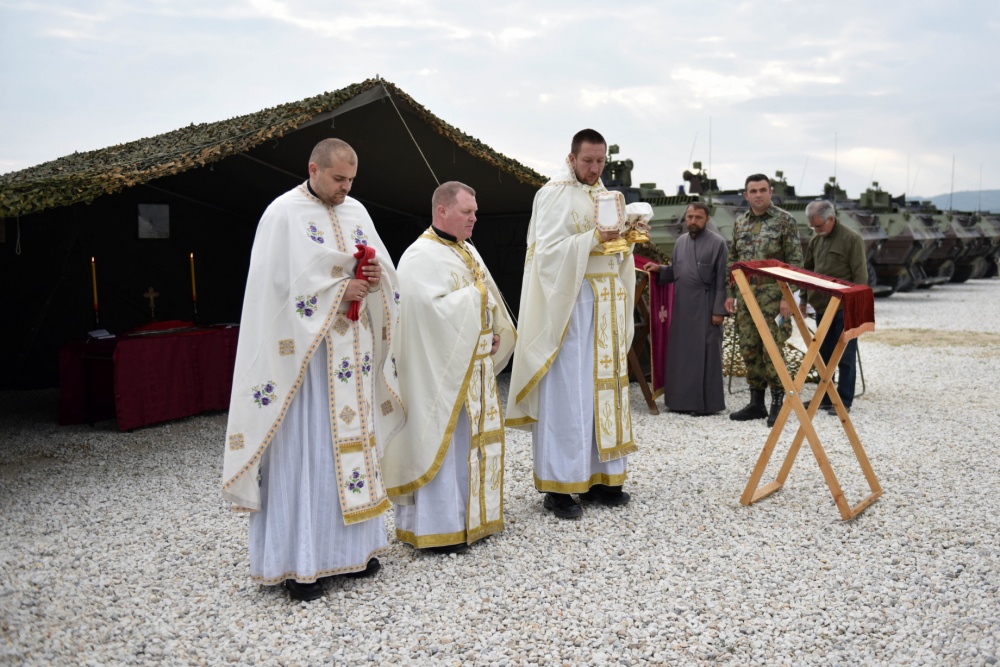 It was an experience of a lifetime for the Rev. James Sizemore, an Ohio Army National Guard chaplain and lieutenant colonel, to participate in a Serbian Orthodox Divine Liturgy June 17 at Holy Trinity Cathedral in Vranje.

Sizemore led a portion of the sermon, translated by the Rev. Goran Sandic, the church deacon and the chief Orthodox chaplain for the Serbian Armed Forces, and provided communion to the church’s many parishioners.

“My experiences have been very good,” Sizemore said. “I’ve learned a lot about the Orthodox church in Serbia.”

According to a 2017 study by the Pew Research Center on religion and public life, less than 1 percent of the American population are Orthodox Christians, compared to the nearly 87 percent of Serbians.

“In the states, I’m a minority as an Orthodox priest because there aren’t many Orthodox in the United States,” Sizemore said. “But here, this country is almost all Orthodox, so it’s a good experience for me to come to a country where most people are of the same religious background that I am.”

The invitation for Sizemore to participate in the Liturgy stems from the strong12-year partnership between Ohio and Serbia.

For more than a decade, Ohio and Serbia have partnered to promote regional stability and develop civil-military relationships as part of the Department of Defense State Partnership Program.

When first established in 2006, the focus was to develop a military partnership that would benefit both nations, but today the partnership has transcended military training into relationships that will last long into the future.

In addition to routine military training events, the Ohio National Guard’s chaplain corps has worked closely with the Serbian Armed Forces since 2013 to reestablish a chaplaincy program that had not existed for more than seven decades. Today, there are chaplains at Serbia’s military bases throughout the country, and the Ohio and Serbia chaplaincy relationship continues to grow.

“We are really proud of what we have done in the previous five years of working together,” Milutinović said. “We have done a lot of things and have really tried to improve the morale of our soldiers.”

Together, Sandic and Sizemore provided a first-ever, multinational Divine Liturgy in field conditions, June 18, during Exercise Platinum Wolf 2018 at Borovac Training Area near Serbia’s South Base.

The outdoor sunrise service began at 6 a.m. at the Platinum Wolf tent city, bringing more than 30 soldiers from around the world to worship and take part in Holy Communion together.

“It has been a wonderful experience, culturally, in partnering with Serbia, from our vantage point,” said Col. Andrew Aquino, chaplaincy director for the Ohio National Guard. “We have learned from each other, the essence of cooperation and respect for each other, respect for different cultures and respect for all religions. We’ve been able to see how religions can corporate together.”