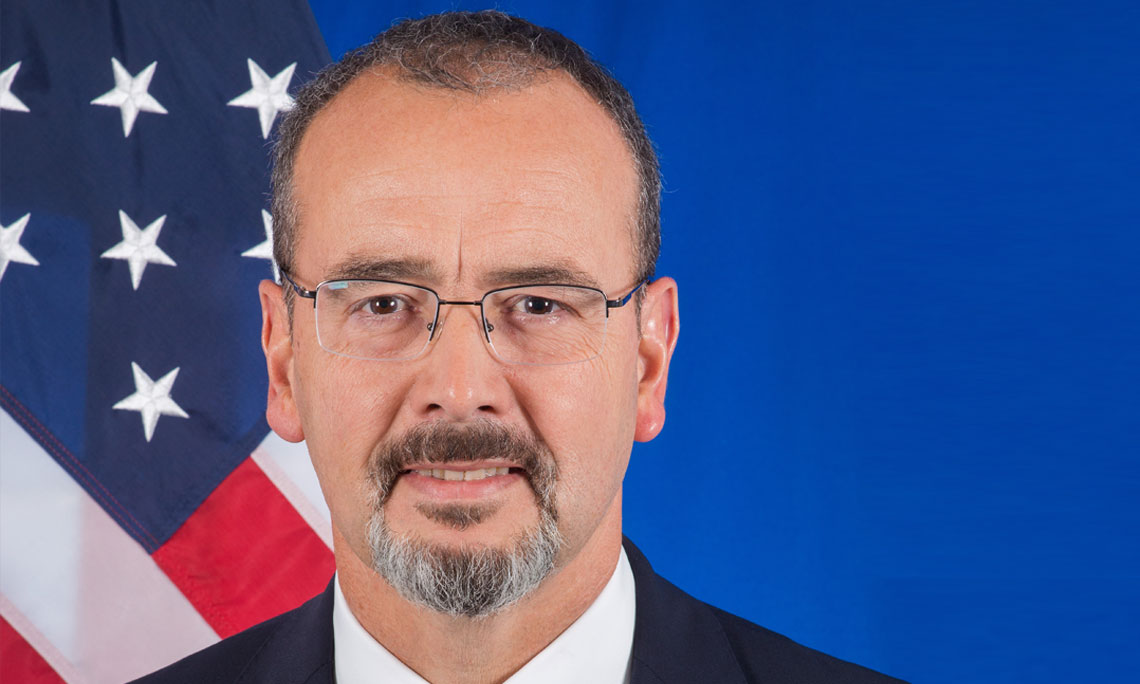 Mr. Godfrey is the president’s nominee to be the ambassador to Serbia. Mr. Godfrey is a 12-year U.S. Navy veteran and a career member of the Senior Foreign Service. He currently serves as deputy chief of Mission at the at the U.S. Embassy in Moscow. Previously, Mr. Godfrey served as director of the Office of Iraq Affairs in the Bureau of Near East Affairs and as counselor for Political Affairs of the U.S. Embassy in Baghdad. He speaks Russian, Turkish, and Serbia Croatian. Mr. Godfrey.

Mr. Chairman, Ranking Member Shaheen, distinguished members of the committee, it’s a great honor to appear before you today as the president’s nominee for U.S. ambassador to the Republic of Serbia. I deeply appreciate the trust and confidence President Trump and Secretary Pompeo have placed in me to represent the American people, and I hope to earn your trust, as well.

If confirmed, I pledged to work closely with you to advance our nations interest in Serbia. This hearing is important event for my family, and I’m very proud that my wife Ann, and two of our three children, our sons Peter and Jamie are with me today. They have served overseas with me through postings in Croatia, Armenia, Turkey and Russia. And although they work with me in Iraq or in Chechnya, their support was essential for my success. My sister, Doctor Katie Godfrey and my niece Rosemary are also present in the room today, and not present, but hopefully watching by live stream is our daughter Ayleash (PH) who lives in California.

In nearly 40 years of service, both, as a member of the foreign service and in the U.S. Navy, I have dedicated my professional life to improving America’s security, prosperity and position in the world. We have sought out challenging assignments, where of America’s active diplomacy can make a difference in advancing our goals. In domestic assignments, I’m proud of the work I did to develop the international coalition to defeat ISIS. My work at the National Security Council helped advance our missile defense capability.

Mr. Chairman, as you know, I’ve just left Moscow, and after serving first as a head of the policies team, and then for two years as Ambassador Huntsman’s deputy chief of Mission, I am fully aware of Russia’s aggressive behavior, malign influence and disinformation campaigns throughout much of Europe. Our team has been an important part of U.S. efforts to confront these challenges, I believe that some of these experiences has prepared me well to serve as chief of Mission in Serbia.

Serbia is a political and economic leader and plays a key role in influencing regional stability and cooperation. It is in the strategic interest of the United States that Serbia develops as a modern democratic prosperous European nation, at peace with its neighbors, demonstrating full respect for the rule of law and rights of law and citizens.

We fully support Serbia’s stated goal of European integration and EU membership. Serbia now stands at a critical inflection point, and political leaders in Belgrade must undertake serious reforms to advance Serbia on its EU path. Most importantly, Serbia must normalize its relationship with Kosovo in order to advance both countries European integration. The United States continues to support the EU facilitated dialogue aimed at comprehensive normalization of relations. We remain ready to help the parties in any way as they pursue a locally owned agreement that is durable, implementable and increases regional stability.

If confirmed, I am committed to promoting normalization of relations between Pristina and Belgrade as a top U.S. priority in the region. Together with my colleagues in Pristina, in Washington, our European partners and this committee, I will work to encourage the parties to return to the table in good faith.

An important element of the United States work in Serbia is promoting and defending our shared democratic values. Violence and threats of violence against journalists in Serbia are increasing self-censorship and hindering journalist ability to faithfully inform the public. If confirmed, I will lead my team in helping our Serbian partners to strengthen their democratic institutions, protect the rights of members of minority communities, combat corruption and improve media freedom. Serbians must take the lead in these efforts, but the United States can be an important partner, and if confirmed, I will ensure that we are.

Serbia has enormous potential with an educated and talented workforce, a location that an important trading crossroads for Europe and a long culture of hospitality. Strengthening the rule of law will enable Serbia to further attract investment and curve of the debilitating emigration of its youngest and brightest.

While Serbia has made great strides in reforming its economy, it needs to do more, particularly, to combat the corrosive consequences of corruption to make it a more attractive environment for business. Serbia is also an important partner–partner in international stability and contributes hundreds of military personnel to UN and EU peacekeeping operations. Serbia’s contribution of peacekeeping troops and medical professionals is among the highest per capita in all of Europe.

If confirmed, I will continue to seek resolution to a persistent irritant in our bilateral relationship. To date there have been no prosecutions for the murder of three Americans, Ylli, Agron and Mehmet Bytyqi, executed while in Serbian police custody in 1999. I am committed to pressing this Serbian government to complete a thorough investigation and ensure that all who are involved in these crimes are brought to justice, regardless of rank or position.

The United States in Serbia have a long, and in some ways, a complicated history. We were allied during two world wars. In 1918, President Wilson raised a Serbian flag over the White House. But the 1990s were a difficult time, and we must work together to find a way to come to terms with that legacy. Nevertheless, the broader arc of our ties has been positive and mutually beneficial.

This is an ambitious agenda, that if confirmed, I would be supported by an incredibly talented team of Americans and locally employed staff at Embassy Belgrade and interagency partners in Washington. With the support of the legislative branch, I am committed to doing my utmost to promote our shared goal and Democratic Serbia providing growth and security for its citizens at peace with all of its neighbors and firmly set on a path of European integration.

Thank you, once again, for granting me the opportunity to be–appear before this committee today, and I look forward to your questions.