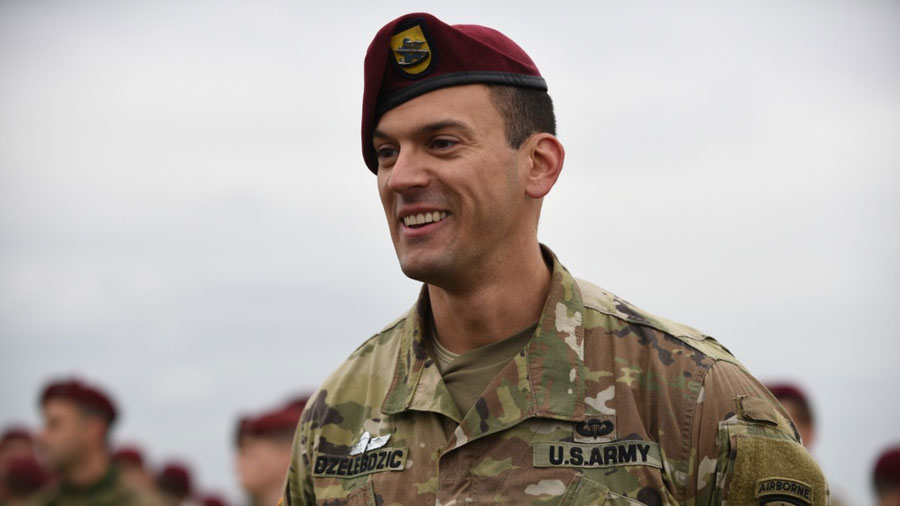 U.S. ARMY Paratrooper Spc. Uros Dzelebdzic, a medic with Charlie Company, 173rd Brigade Support Battalion, 173rd Airborne Brigade, was born in Belgrade, Serbia and is acting as translator during the exercise. Exercise Double Eagle is a multi-national company-level airborne insertion exercise designed to enhance the relationship between the U.S. and Serbia and strengthen regional security.

Left foot, right foot, stumble, regain balance. Left foot, right foot, faster, faster – Proceed down the unstable steel corridor. Here it comes! A corner glimpse of the inevitable shines through the Paratroop door. Hand the static line off deliberately, coolly, controlled. Ensure the jumpmaster indisputably grasps the double-stitched portion of the yellow lifeline. Drop the hand directly to the reserve pack tray’s side. Pivot, head on the horizon, take one firm step onto the external platform and jump intrepidly, up 30 inches and out 30 inches, into the perilous abyss of uncertainty.

It wasn’t the first, it wasn’t the last and it certainly wasn’t the only time U.S Army Spc. Uros Dzelebdzic of Brigade Support Battalion, 173rd Airborne Brigade participated in an Airborne insertion exercise, but this occasion, Exercise Double Eagle 17, was special. He was jumping into the scenic pastures of Serbian countryside, merely an hour away from his hometown, Belgrade, Serbia. To his front, flank and rear, inside the bird, stood his Paratroop brethren from both his native country and his adopted country, experiencing the ultimate adrenaline rush, together.

“I’m glad to be here. Glad to be working with Serbia’s 63rd Paratroop Brigade,” said Dzelebdzic.

His life had come full circle. Thirteen years ago, Dzelebdzic left Serbia to become a foreign exchange student in America. Today, he returns in a professional capacity; to invigorate the relationship between both countries, deter aggression and promote stability in the region. The journey he ventured, to arrive at this unforeseen juncture, has been fascinating.

Most of his life, Dzelebdzic played water polo. He had a knack for it, surpassing his peers. His iron will to succeed, mixed with his unmatched work ethic, guaranteed him a bright future.

At the tender age of 17, he packed his bags in search of adventure and opportunity. No relatives, no friends, no prior acquaintances awaited him in America. He had a semi-solid grasp of the English language from watching television, movies and listening to music. In short, he was entering a big world filled with the unknown.

Admittance into the country was granted through the foreign exchange program. Fortunately, his new host family fit him and his aspirations decorously.

“My host family was amazing,” said Dzelebdzic. “They are great people.”

They lived in Moorpark, California, an area renowned for elite water polo competition. Their son was a water polo athlete on the high-school team. Dzelebdzic immediately flourished in his new life. His positive attitude, similar interests and sheer talent entwined amiably with the American water polo players, so he made the team, excelled in it and developed many friendships along the way.

During that single year of high school, his talent was divined by college recruiters searching for a star. He was picked up first by Queens College in New York, played there momentarily, then moved clear across the country back to Irvine, California to attend Concordia University. He competed for their team on scholarship and obtained a Bachelor’s degree, double-majoring in Physiology and Sports Science.

Upon graduation, Dzelebdzic found employment as a water polo coach at University of Southern California. The school is one of the top ten water polo programs in the nation. He coached for one year at USC, then his teeming drive for adventure and expansion led him to explore a more diverse field within water polo.

“I started my own water polo club in Huntington Beach, California,” said Dzelebdzic. “It was called Vanguard Aquatics.”

By owning a club, he was able to take his adept knowledge of the sport and not only coach, but also learn the business side of the sport. He was successful in his endeavors. During his time there, from the inception of his club to the day he left it, the team won the national championship every year.

“We ended up being five-time national champions,” said Dzelebdzic. “Being able to teach somebody what I knew from a very young age, and see them develop into not just regional, not state, but national champions, that’s really what drove me for a long time.”

Seeing the success that citizenship with the United States brought him, made him cognizant of the opportunities available to him. He could discern his true intent, and put an admirable plan into action. He boldly decided to reciprocate the goodwill shown him, by enlisting in the U.S. Army as a 68W Combat Medic Specialist.

As a Bachelor’s degree bearer, he had the opportunity to commission as an officer. However, after working in a managerial position for the previous five years, he felt a desire to work in the trenches. He aspired to be a part of the brother and sisterhood of brave souls who save lives in the most austere environments.

“I wanted to do something more hands-on,” said Dzelebdzic. “Being a medic. That field has always been something I want to do more than go the officer route.”

He went to a recruiter, signed an enlistment contract and shipped off to basic training. After basic, he went to the combat medic training, where he discovered his passion for the practical side of what he was taught throughout his college years.

“I loved the 68W school,” said Dzelebdzic. “Majoring in physiology made it a little easier, but it also made me realize how the book knowledge that I have is not necessarily what I’m going to be applying. The practical skills that you need to practice over and over again is what makes that MOS so great. I’m always excited to learn more.”

Enter Vicenza, Italy. Home of the storied 173rd Airborne Brigade. A location positioned perfectly for the busiest unit in Europe. Members are constantly traveling, training and creating stability in the regions that make up the continent. Only a Brigade that is disciplined, lethal and always combat-ready can uphold the crucial mission U.S. Army Europe places on its shoulders. To achieve this state of readiness, the 173rd Airborne Brigade produces quality soldiers who are motivated beyond comprehension.

Dzelebdzic was fortunate enough to begin his Army career in Vicenza, joining the ranks of the elite Sky Soldiers. His burning passion to succeed in everything he does fits in with his peers.

“The unit that I’m in is absolutely awesome,” said Dzelebdzic. “It’s my first duty station, my first unit, but it’s better than anything I thought it could be.”

With his joining the 173rd Airborne Brigade, he is allotted the opportunity to contribute directly to both countries that he loves, the U.S. and Serbia.

Now, in Serbia, Dzelebdzic is utilizing the diversified skillsets he has acquired over his life. He is jumping out of a plane, ready to administer first aid to anyone who may be injured, and translating parachuting techniques that differ between Americans and Serbs.

“On the invitation of the Serbian government, we are training with Serbian Paratroopers on our parachutes and our airplanes, so they can be more familiar with them,” said Dzelebdzic. “Being able to interact with the Serbs helps those relationships. They get more trust from us and we earn their trust with each interaction.”

It has not been customary for Americans and Serbs to train together. Exercise Double Eagle 17’s main purpose is to strengthen the bond between both countries.

Today, the potential has been realized. 96 American Paratroopers and 120 Serbian Paratroopers jumped from 2 U.S. Air Force C-130 Hercules aircraft, all wearing the American T-11 Static Line Parachute. Upon landing, both groups grinned as they discussed their shared experience.

“Even for the most experienced jumpers, this was new to them,” said Dzelebdzic. “They were very eager to share that experience.”

Once they turned in their parachutes, everyone gathered in a multi-national formation, in front of hordes of media and distinguished visitors, to include: Serbian President Aleksandar Vučić, Deputy Commanding General of USAREUR, Major General John Gronski, and U.S. Ambassador to Serbia, Kyle Scott. They gathered for the wing exchange, signifying acknowledgement and unity between both countries.

As for Dzelebdzic, he enjoyed the camaraderie of working between both countries, and fortifying a bond between both sets of brothers that fall from above, the Sky Soldiers and Serbian Paratroopers.

“I felt very welcome here,” said Dzelebdzic. “It’s great to be back in Serbia as an American Paratrooper. Working with my American and Serbian brothers has been outstanding.”