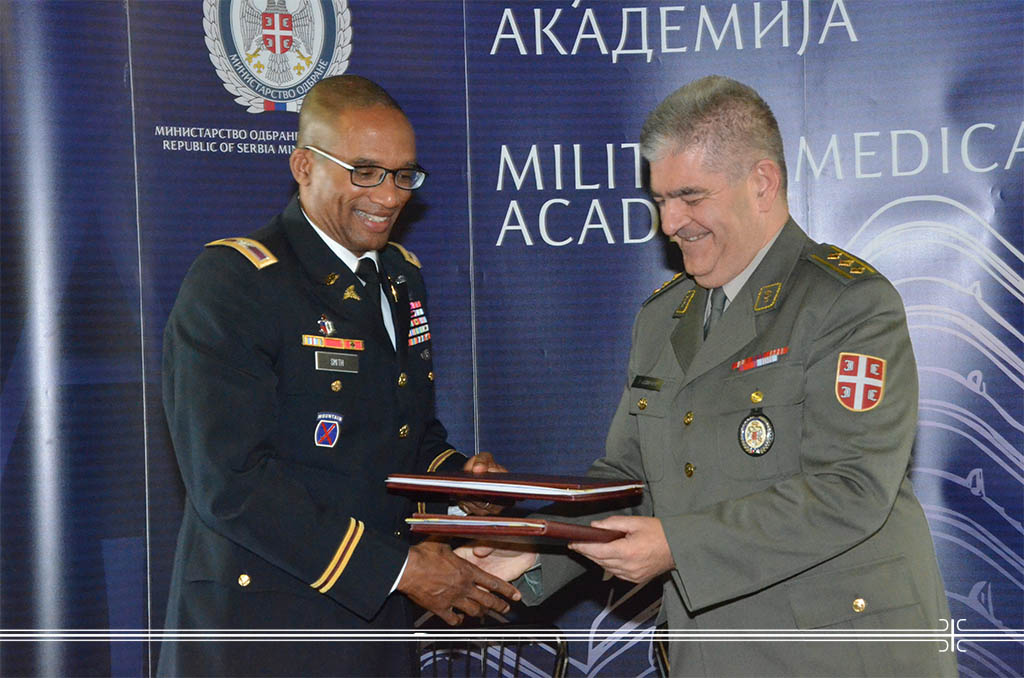 U.S. EUCOM and Serbian Military Medical Academy Sign a Memorandum on Cooperation in Cancer Prevention 1
Chief Surgeon of the US European Command Colonel Dr. Ronald E. Smith and Deputy Head of the Military Health Care Department Colonel Ugljesa Jovicic signed a “Memorandum of understanding on cooperation in the treatment of cancer” at the Serbian Military Medical Academy.
At the meeting preceding the signing of the Memorandum, Colonel Jovicic said that the military medical bilateral cooperation is at a high level, and that 10 years of cooperation between the SAF and the Ohio National Guard was successfully marked during the recent joint medical engagement of the local population in southern Serbia called “humanitarian assistance “.
Deputy Head of the Military Medical Academy Colonel Prof. Dr. Dragan Dincic said that the initiative for joint efforts to foster the prevention of malignant diseases is very good and that the MMA has the capacity to cooperate in the field of treatment as well as education and research.
Colonel Smith conveyed his personal impressions of MMA’s organization as a military hospital that is open to the most complicated medical cases both the military and civilian insured. He said that the increase in malignancy is a big problem, and that strengthening measures in order to prevent the occurrence of the disease, and early diagnostics are essential for increasing the performance of treatment.
Head of the Clinic for Plastic Surgery and Burns Colonel Prof. Dr. Nenad Stepic and Head of the Department of Gastroenterology of the Clinic for Gastroenterology and Hepatology, Colonel Prof. Dr. Dino Tarabar presented MMA’s experience in diagnostics and treatment of malignant diseases. It was mentioned that the number of diagnosed cancers is on the rise in almost all branches of medicine and the MMA admits about 3200 surgery patients with malignancy in 11 surgical clinics annually. The MMA does not have an oncology clinic as a separate unit but teams of doctors of different specializations work together on each case.

It was concluded that modern equipment for screening programs provides an early diagnostics of the disease which is directly linked to successful and efficient treatment, and that is the aim of human and economic aspect of treatment. The mutual interest in exchanging knowledge between the Serbian and American doctors, as well as the various forms of training was also noted. In the coming period further steps and course of MOU implementation will be defined.