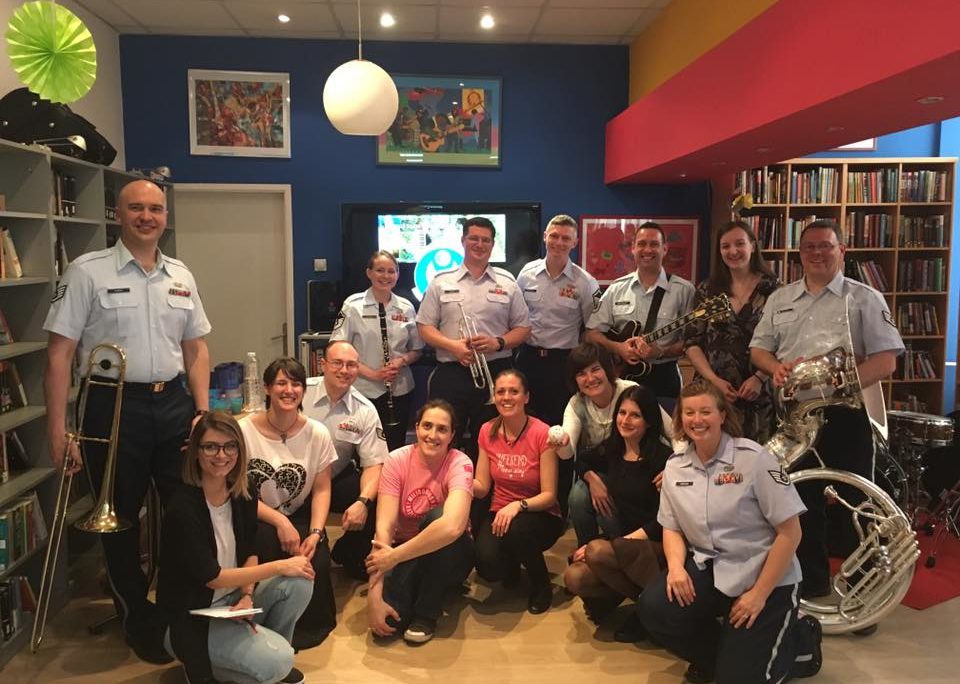 The United States Air Forces in Europe Band ensemble Wings of Dixie recently toured Serbia to celebrate the American Culture Days hosted by the U.S. Embassy Belgrade, reflecting the strong partnership between our two countries. To start and promote the tour they performed live on Serbia’s largest national TV station RTS. Next stop was the cultural center in Cuprija, where the bandsmen conducted master classes with students of the music schools Muzicka Skola Milenko Zivkovic and Muzicka skola Cuprija.

Following the master classes the USAFE Band performed a concert for the students and the local community. The concert was broadcasted by Radio Televizija Pomoravlje whose reporter took the opportunity to interview Band Leader MSgt Rebecca Collins to find out more about the Band, their tour in Serbia and her personal impressions of the country.

Another concert performance at Palas Park in Belgrade along with the Belgrade Chamber Choir under direction of choirmaster Vladimir Markovic built the opener for the exhibition “The war and posters 1914-1918” at the Museum of Applied Arts, commemorating the partnership between Serbia and the U.S. during WWI.

After the concert the Airmen had the chance to see the exhibition and learn more about the partnerships of our countries during the Great War. The American Corner Belgrade invited Wings of Dixie for a lecture and an acoustic performance which was live streamed via Facebook.

The highlight of the tour was the performance in Sombor with the Stanislav the Binicki Orchestra, with whom the USAFE Band built a long-lasting friendship. The musical symbiosis between both military bands brought people together, regardless of the color of uniform or flag. U.S. Ambassador to Serbia Kyle Scott and Serbian Special Brigade Commander Brigadier General Jelesije Radivojevic enjoyed the evening with the Serbian crowd – cultural barriers were bridged through the international language of music. The tour ended in Novi Sad with a performance at Studio M. The USAFE Band is proud they could bring American music to the people of Serbia and learn more about the Serbian culture.